Most of us have grown-up reading geography school textbooks stating arid region of India i.e. Thar Desert is a rainfall deficit region and it hardly receives 12-15 cm annual rainfall. If we analyse the rainfall record of last five years of the region, it may compel us to change our notion about the same. In 2015 there was an early onset of monsoon in the state of Rajasthan. It ended up with 78 % excess rainfall in Western part and 54 % excess rainfall in East Rajasthan. In 2017, districts like Barmer recorded 49 mm, Jaiselmer 28 mm and Bikaner 7 mm in a span of 24 hours. 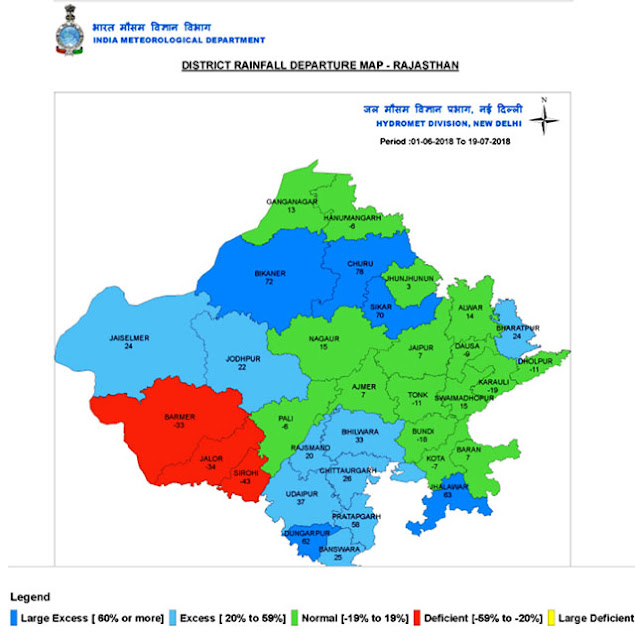 The given map above developed by Indian Meteorological Department (IMD) for the period between 01st June, 2018 to 19th July, 2018 shows that there has been 20 per cent to 59 per cent excess rainfall in Jaiselmer district of Rajasthan. This year also East and West Rajasthan are going to remain rain surplus during this season. As of 17 July, 2018 East Rajasthan is rain surplus by 16 per cent, while west Rajasthan is 15 per cent in excess. Such heavy downpours have created flood like situation in several cities of Rajasthan.

Reasons behind Flash Flood havoc in Arid Parts of Rajasthan 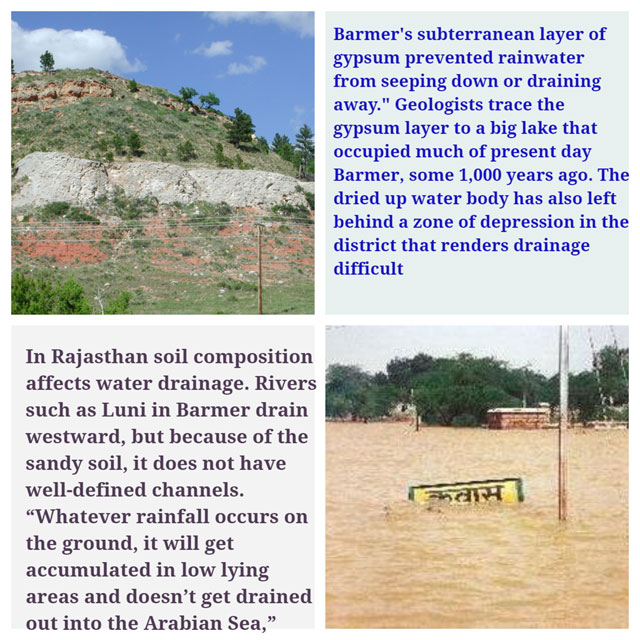 One third of the World’s land surface can be classified as arid or semi-arid. In those areas, on the one hand precipitation is rare and serious drought occurs frequently, on the other hand flash floods may cause serious disasters. To understand the flash floods, it is very important to know the precipitation pattern in these areas.

Nature of Precipitation in arid and semi-arid areas

Smaller Frequency of occurrence of rainstorms: In these areas rainstorms are random events with a small frequency. Storms are formed over a much smaller area.

Short Duration and High Intensity Storms: In arid regions of tropical zones rainstorms results from short duration convective storms which usually lasts from 15 minutes to two hours with an intensity of 100-150 mm/hour.

Major characteristics of Flash Floods in arid and semi-arid areas

Randomness of Distribution: In any given catchment the frequency of occurrence of flash floods is very small, perhaps, once in many years. However, due to climate change such occurrences are becoming more regular (Mishra, Anupam, DTE).

Complex Formations: Flash floods in these regions occur from storms or cloudburst of limited areal extent, or snow ice-melt dam-break, or combination of all these factors.

Impact of Flash Floods in Arid and Semi-Arid Regions

Engineering Measures:  It varies because of different natural geographical conditions and properties of specific floods.

Remarks: The most essential and significant measure to manage flash floods in arid region is real-time monitoring of flash floods, development of real-time and precise warning system and hazard mapping possible through the induction of remote-sensing and GIS techniques. It is also important to integrate the new technology with traditional knowledge base, keeping in mind the ground realities.

What is Juno Mission? How it can help us in understanding origin and evolution of Solar System

What is Third Pole